Back to Nutrition and hydration

Dysphagia is the medical term for swallowing problems. It's used to describe a swallowing disorder usually caused by neurological or physical impairments of someone's swallowing mechanism.

Dysphagia is found across all our service user groups, with increased risks presenting for service users with a learning disability, history of stroke, progressive neurological condition, complex mental health problems and head injuries.

Without proper management, dysphagia can increase someone's risk of:

How can we help you?

If you are supporting a service user who is having difficulties with eating, drinking and swallowing, you can refer them to the Trust's dysphagia practitioners for support. Referrals are accepted based on the individual service's eligibility criteria.

Our dysphagia practitioners are here to provide assessment, advice, support and intervention for people with swallowing difficulties. We aim to improve the quality of life for patients and where possible improve function and independence within the community.

A dysphagia practitioner is usually a speech and language therapist, but can include other specifically trained professionals such as nurses and physiotherapists.

Changes to terminology of texture modified foods and thickened liquids

​International Dysphagia Diet Standardised initiative (IDDSI) have published international standardised terminology and definitions for texture modified foods and thickened liquids for people with dysphagia, and both the Royal College of Speech and Language Therapists and the British Dietetic Association have announced that they will be supporting the adoption of the new framework.

The new IDDSI standards came into play on 1 April 2018. Below you can view the new standards for foods and drinks. 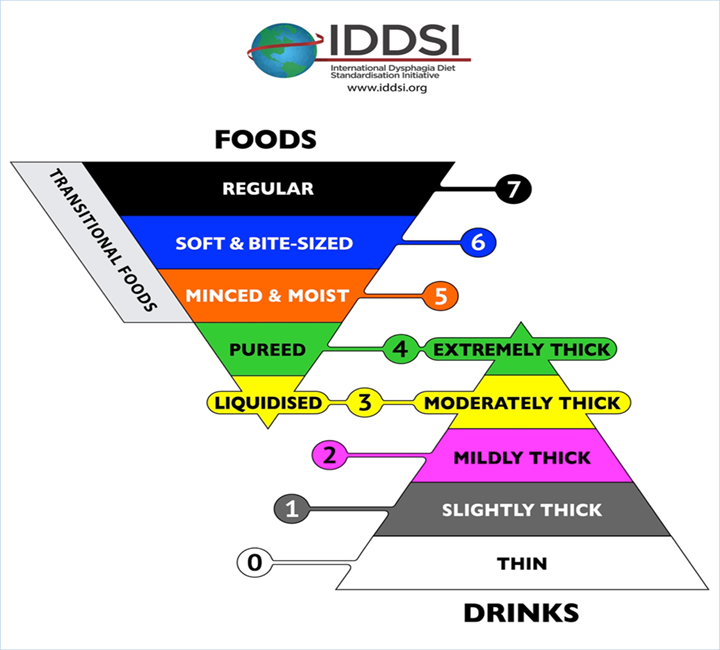 Back to our nutrition and hydration page