When the going gets tough

Back to Secure Care news

Storm Arwen caused widespread disruption across the North West last weekend, but the horticulture team at Maghull Health Park took impromptu tree felling and clearance all in their stride.

Arriving on site at 5am on Saturday they began to grit the site due to freezing temperatures. But as they got under way head gardener Paul Pruden and colleagues Phil, Ian, Dave and Neil, soon learned the storm had damaged a number of trees.

Paul said: “I was gritting with the tractor and through the exterior fence could see headlights of cars stopped in the road on the estate at Beechway. I went to investigate and saw a large tree on our side of the fence had been brought down in the wind.

“We quickly mobilised and set to cutting up the branches and clearing them from blocking the road for the convenience of the residents. We made the area safe, and no damage by the fallen horse chestnut tree was done to cars or property other than our boundary fence.

“During the day we cleared a further four damaged trees from across the Maghull site, so it was a busy weekend for all the team.”

Associate Director of Estates and Facilities Michele McGee added: “Paul and the team have again gone above and beyond to support our staff, service users and the local community to prevent any further adverse impact. I can always rely on Paul and his team to jump to the rescue and get the job done to the highest standard.”

A length of fencing close to the car park at Rathbone Hospital, Liverpool, was also blown down. Staff at the Low Secure Unit took immediate action to make the area safe and a maintenance worker from MITIE arrived quickly to repair the fencing. 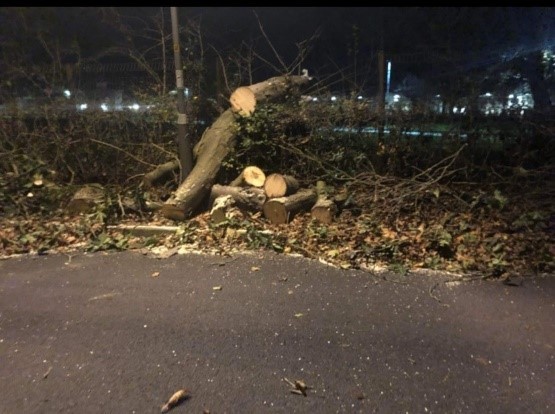